Casting a 2-Part Mold in 1 Day 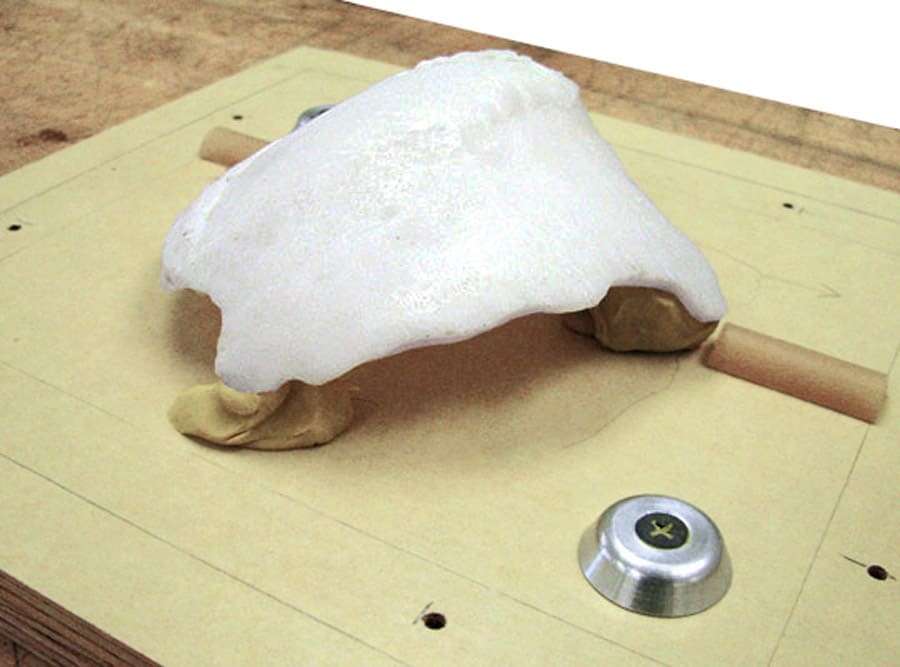 Use some clay to raise the part from the parting board and orient the part to maximize the flow of material and minimize the amount of air that could get trapped. 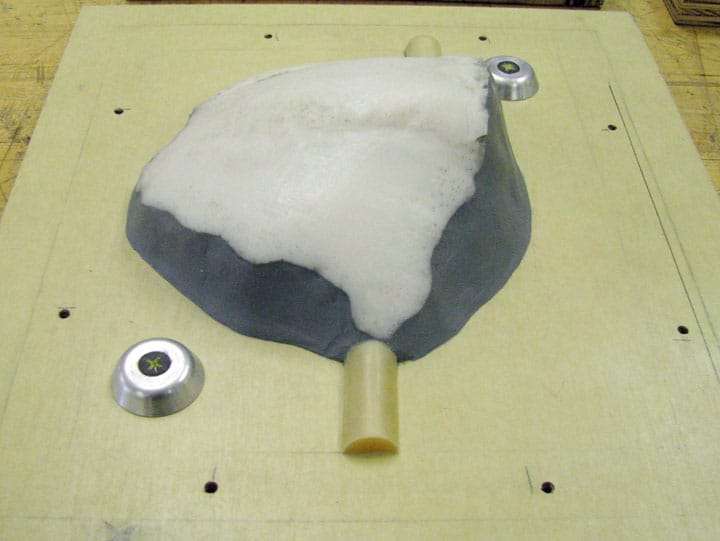 Build up a mound of clay underneath the part, leaving room for the gate and vent. The angle from the clay to the board should be greater than 90º to make de-molding easier. 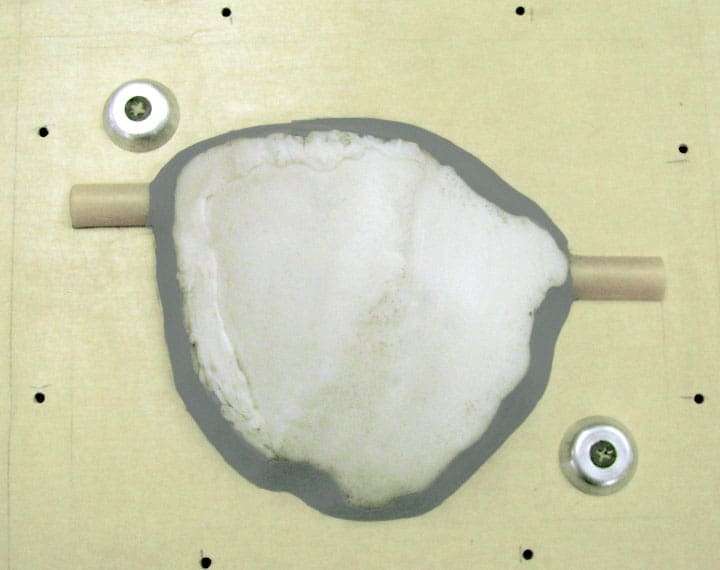 Make sure there is a complete seal between the edge of the part and the clay to avoid undercuts. 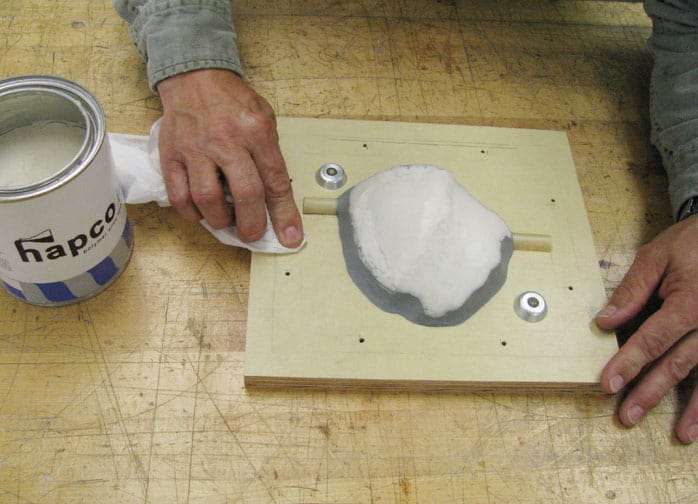 Using Greast-It™ Wax P or another wax release agent, wax and buff the parting board and registration buttons. This will help seal it and act as a buffer between the board and the Grease-It™ Two.(PVA spray release) 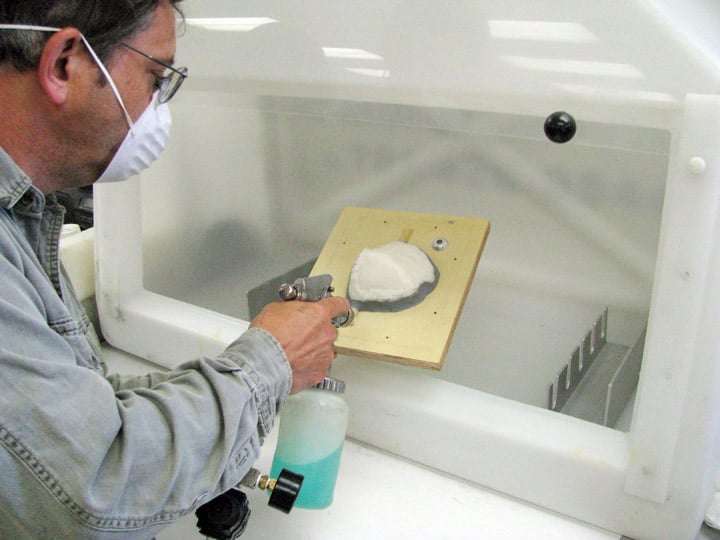 Using a Spray Gun, evenly coat the part and board with Grease-It™ Two. This is a Polyvinyl Alcohol which forms a thin film that polyurethanes or epoxies won’t stick to. It is water soluble and can be easily washed off with soapy water. 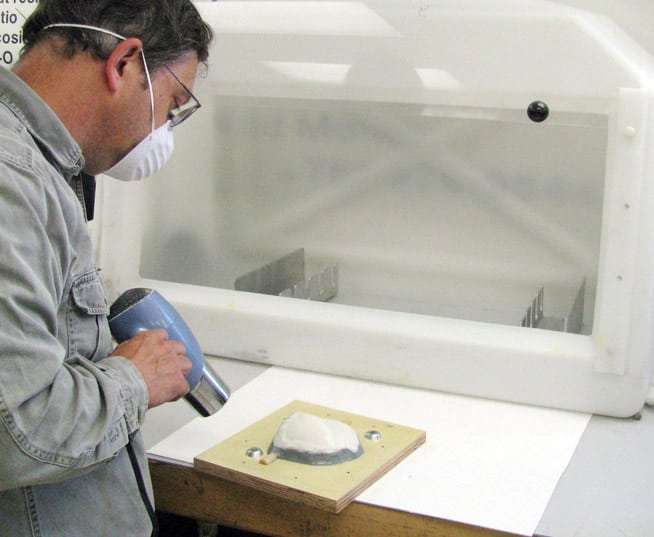 Using a household hair dryer, dry the release agent in-between coats to speed up the process and ensure a smooth, even coating. Generally, 2-3 coats should be applied. 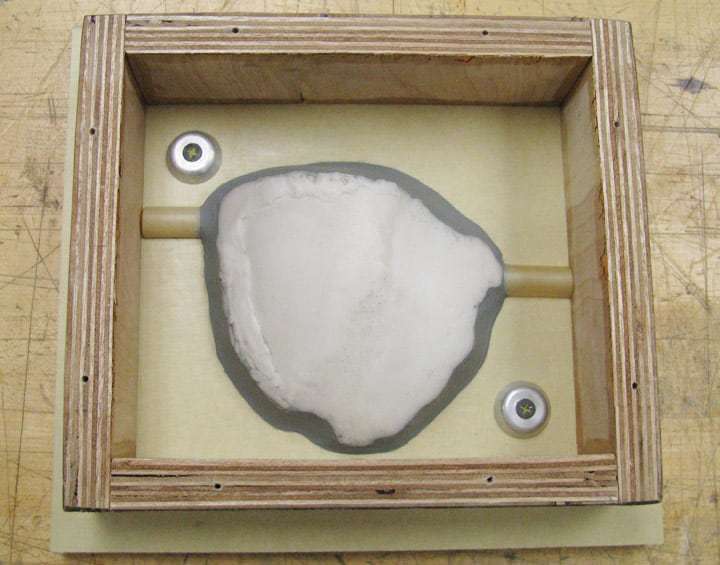 After releasing the part, create a frame around it and mount it to the parting board. This should be at least .5” from the part on all sides but no more than 2” to minimize cost and shrinkage. Make sure to seal the edges where material may leak from using hot glue, clay, or wax. 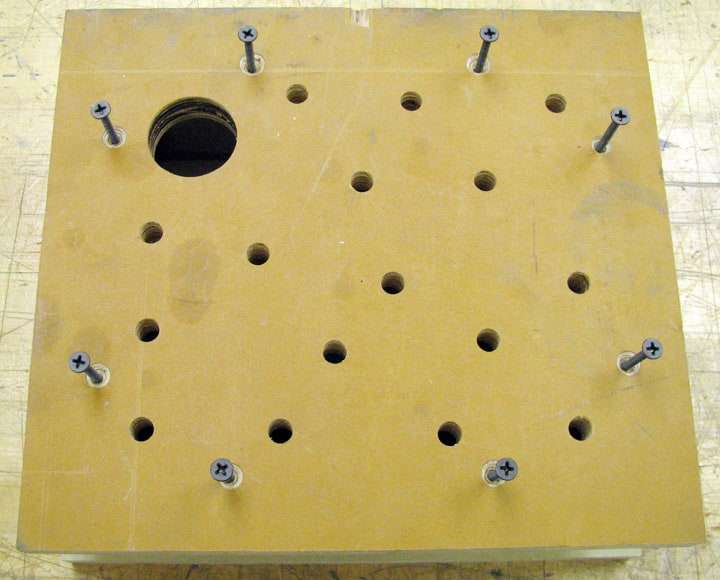 We are filling this particular mold through a backplate that will be permanently attached to the rubber once it’s cured. Drill vent holes roughly 1 1/2” apart all over the top and add one larger hole that will be used as the fill port. 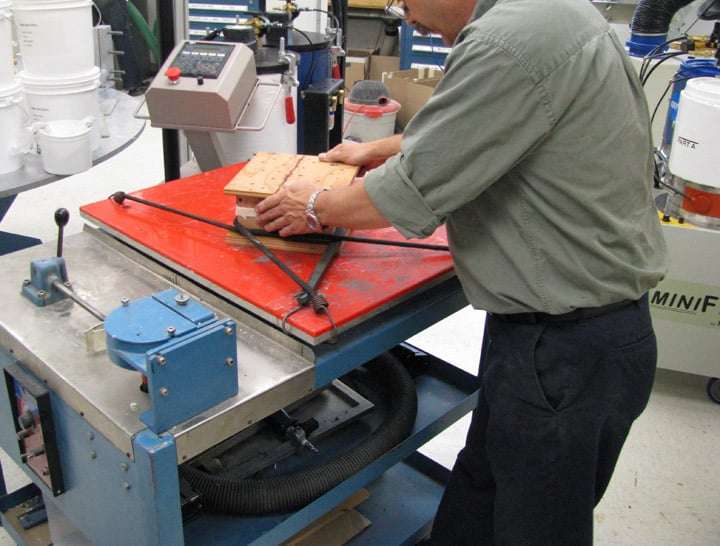 Secure the mold frame and parting board to a flat surface or a vibrating cart. This will allow the air to rise to the top more easily. 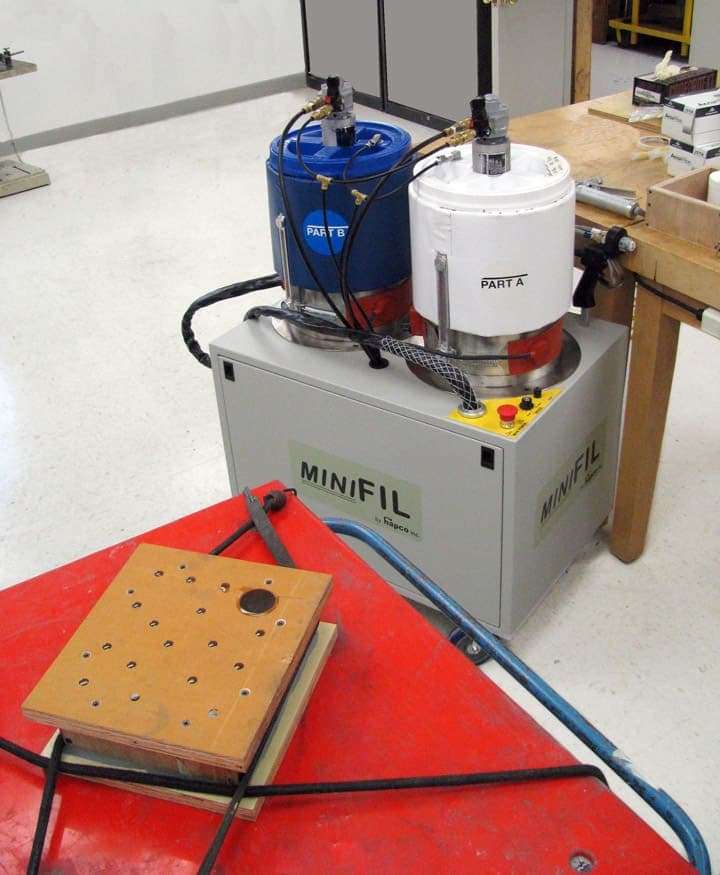 For this straight casting application, we are using Hapco’s

MINIFIL™ dispenser. This meter mix machine is necessary to save time and money and eliminate the measuring, manual mixing, and mess associated with casting urethane rubbers and plastics. This particular mold will be cast using Hapco’s Steralloy™ 2036-5. 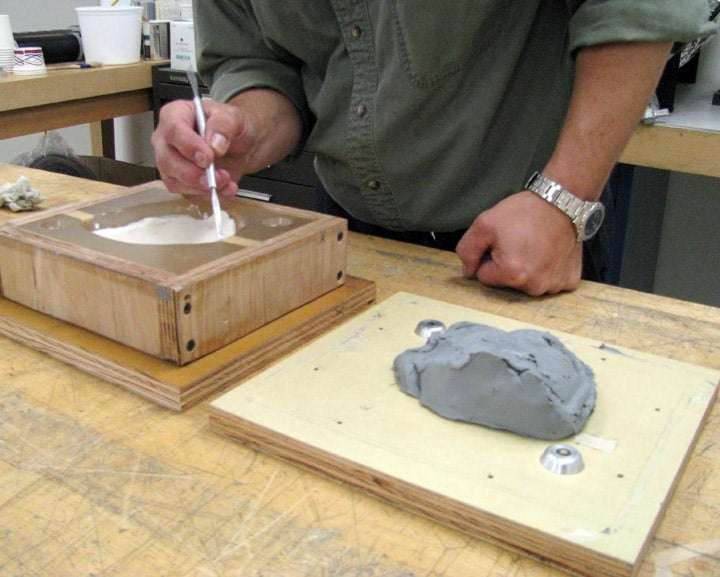 Using a slightly rounded filleting tool, remove the clay from the pattern. Be careful not to gouge or stab the mold because it is still very soft. 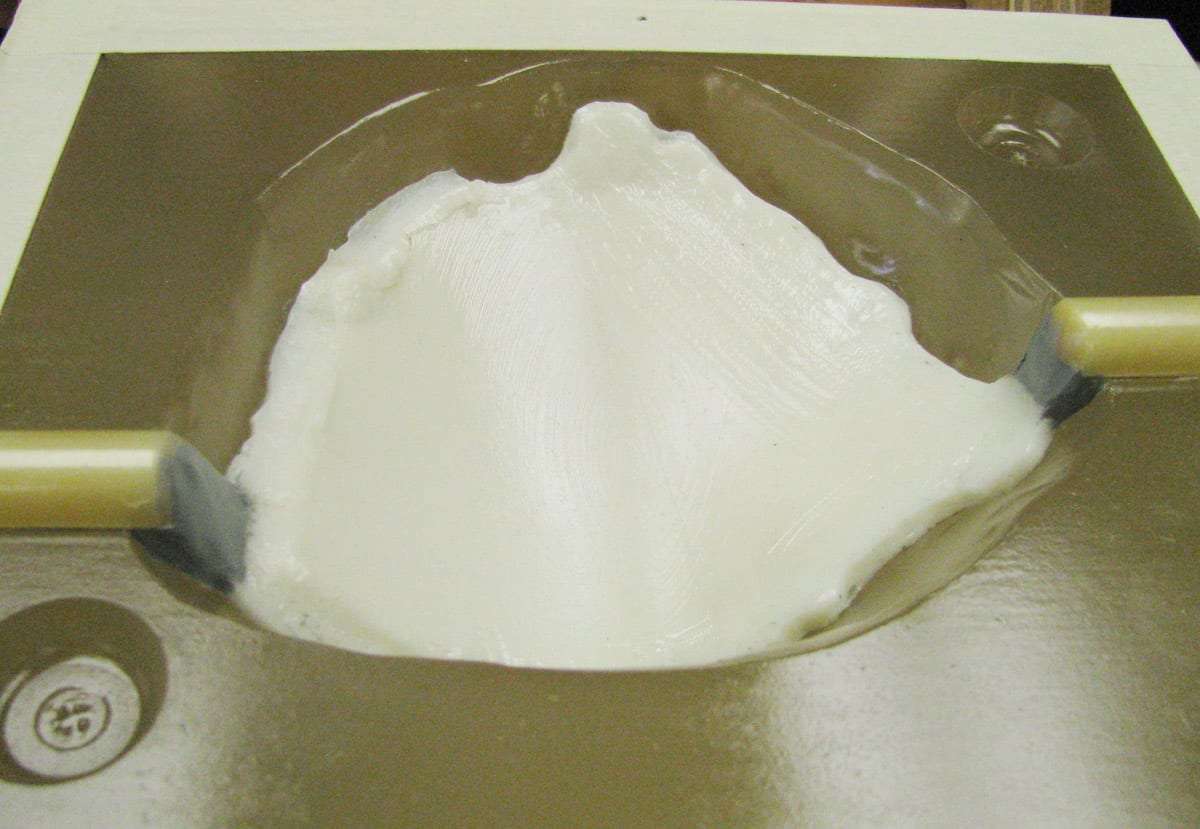 When all of the clay is removed and the part is clean, add another piece of half round wax to the top of the other half.  Use clay or wax to connect the gate and vent to the part. 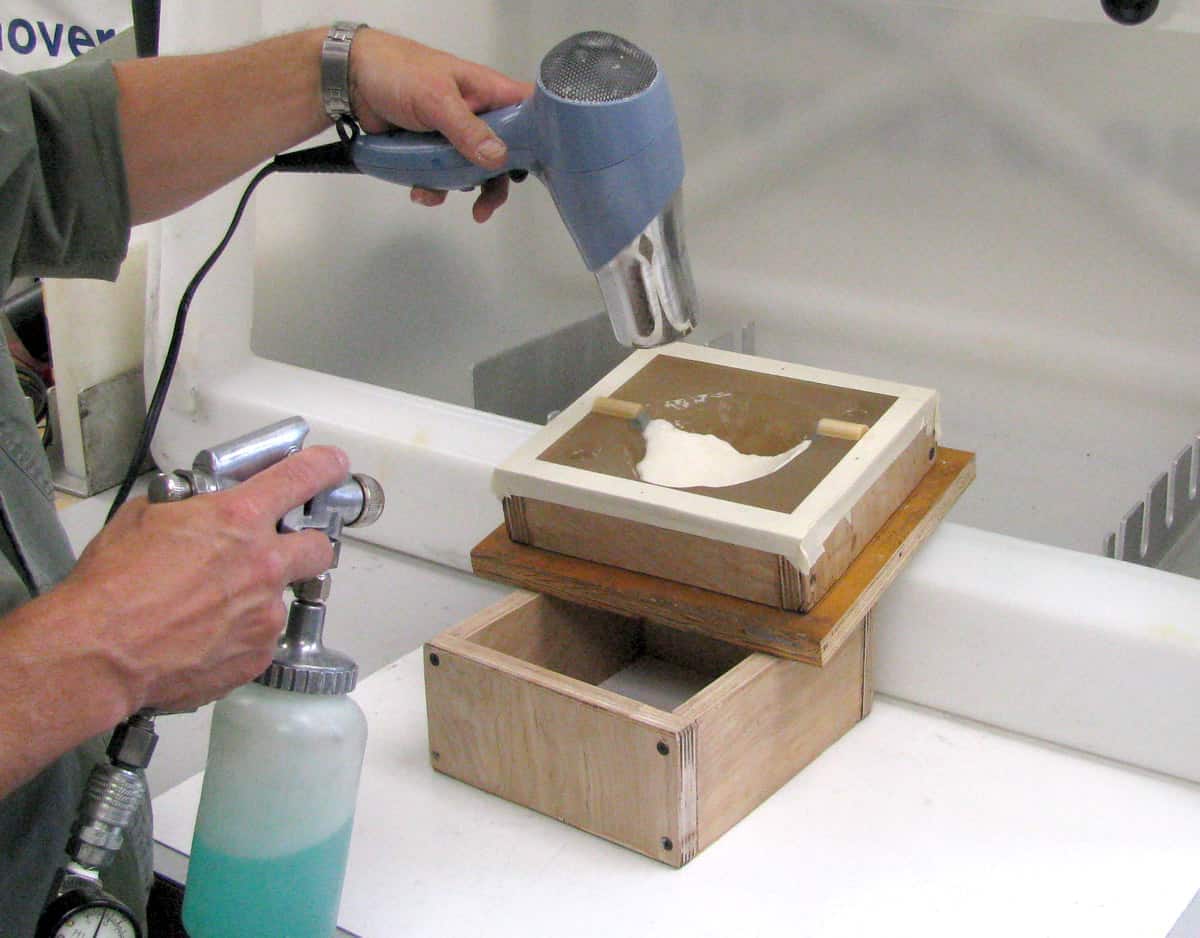 Using a spray gun, evenly coat this half of the mold with Grease-It™ Two

.  Use a hair dryer in-between coats to speed up the process and ensure a smooth, even coating. Repeat this process 2-3 more times. 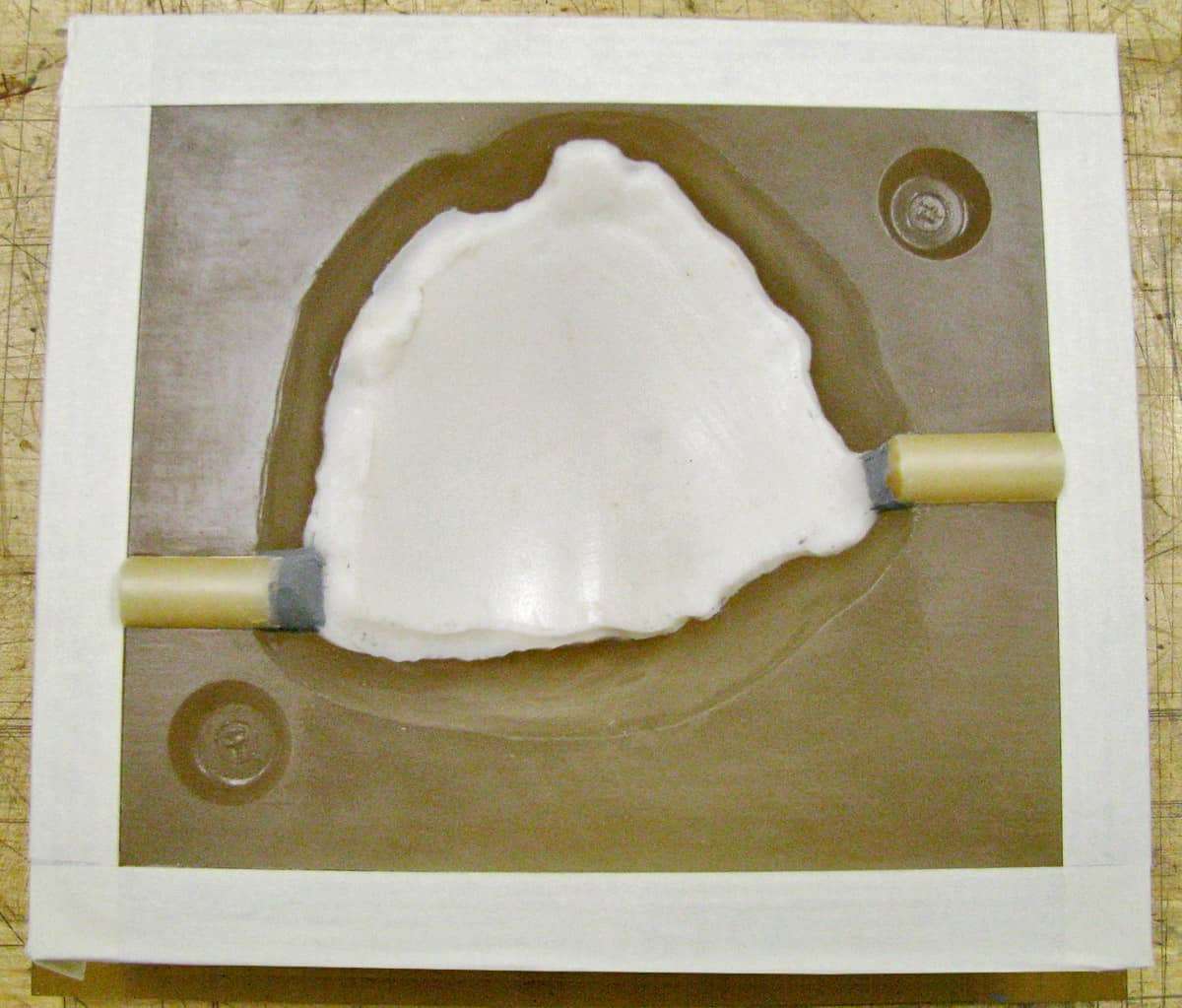 TIP: Apply tape to the top of the frame and then remove it after the second half is cured. This will create a tighter seal between the two halves of the finished mold. 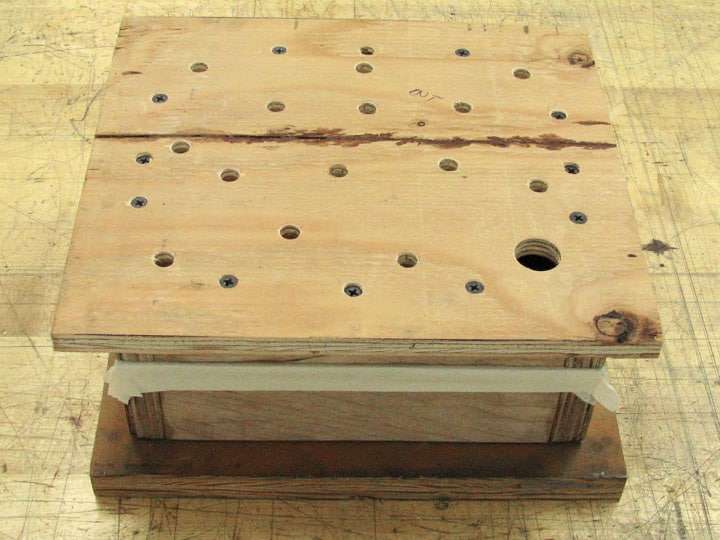 Cut and drill a second backplate and screw it onto the frame. Seal around the seam line of the two halves using tape, hot glue, clay or wax. 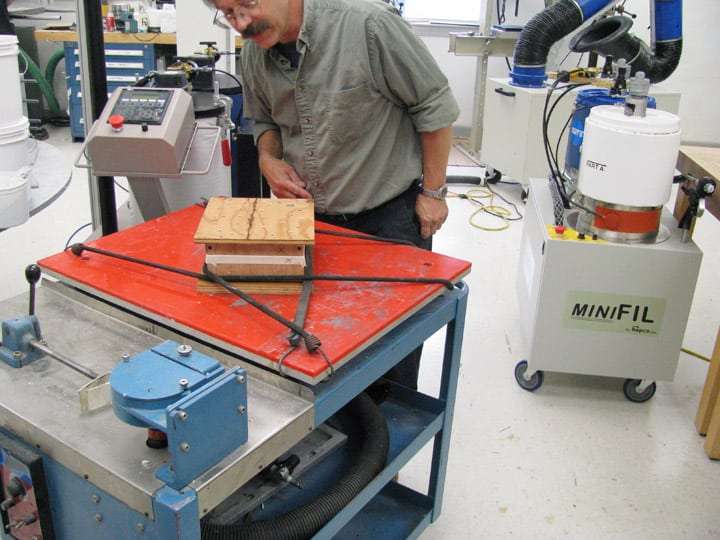 Secure the mold box to a vibrating table using clamps or straps to make sure the mold doesn’t vibrate off of it during the filling process. Again, we are using Hapco’s MINIFIL™ dispenser. This half of the mold will also be cast using Hapco’s Steralloy™ 2036-5.

In just one day we have created a two part mold using Hapco’s Steralloy™ 2036-5. This material is considered food grade and very soft with a

durometer of 35A. It’s 5 minute gel time allowed us to get the job done fast.